What does the pest management tool mean for farmers? 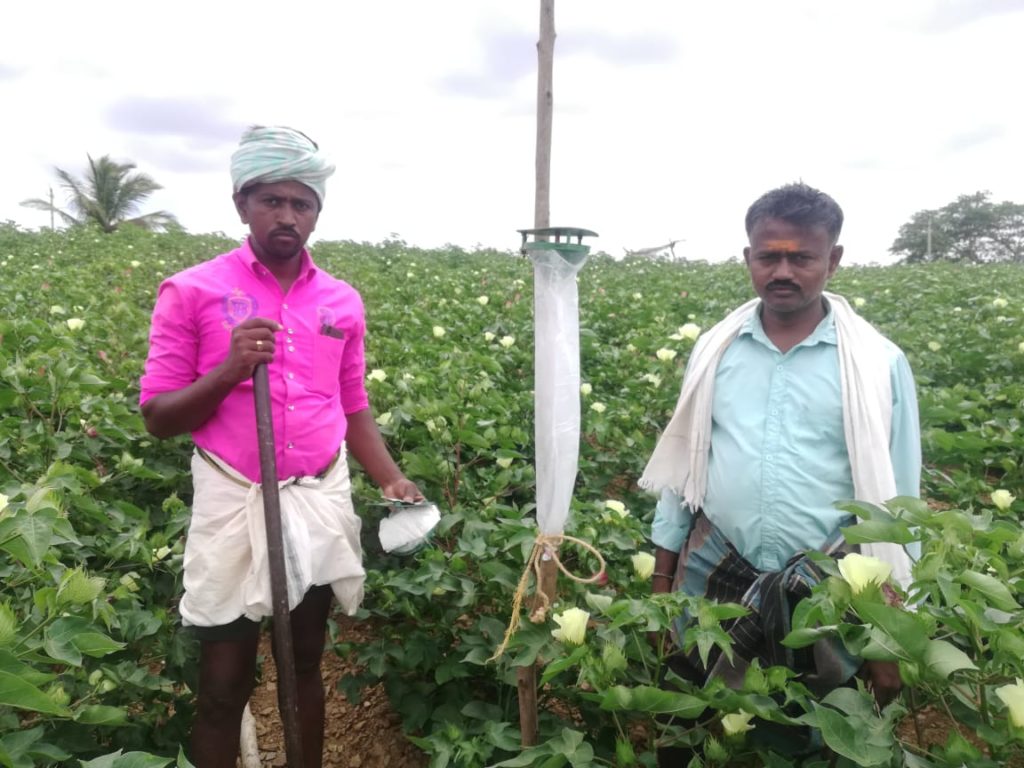 Over the past three months, the team at Wadhwani Institute for Artificial Intelligence has been working with over 100 cotton farmers in Karnataka. A small village near Hubli was our pilot location. Agriculture contributes about 18% of India’s GDP, and cotton farming forms a major part of the country’s agricultural product. Pests, primarily American and Pink Bollworm, have in the past few years destroyed up to 50% of the crop. They hurt not just the ecosystems but also several thousand families. AI can play a role in alleviating this problem.

Our blog detailed how we set up processes and managed to conduct a pilot remotely. This article by our researchers demonstrates the role AI plays in our product. But none of this works if the app is not built for the farmers, who are a unique audience. This documents the design thinking that went into building the app. But all of this leads to one place–impact. How can we help farmers get the most out of their plot of land? We spoke to a few farmers who were part of our pilot over the summer and documented the stories of two.

“No one told me I had suffered a pest attack”

Kariyappa is a 20-something farmer, who has been growing cotton for the past ten years. He leads a simple life. But 2019 was a dark time. His one-acre plot, which usually yields 10 quintals of cotton, gave out just 5. It was not enough to cover his costs. He didn’t know what went wrong. When he picked the lint, it had a black rotten core. It is not until a year later till he used Wadhwani AI’s pest management solution did he realise that he had faced an attack by the Pink Bollworm.

“No one told me, before the app, that I had suffered a pest attack,” he says. What about his neighbours or his friends? He stops for a second before he replies. “People don’t want to tell you these things because money is tight. They believe the market can’t give everyone a good rate.”

So what did he think of the pests on his farm?  “I didn’t know what these insects were,” he says. “Not until I caught them in the trap did I realise they were hurting my crop.” The app advised him that he had a severe attack. A red alert. It asked him to take immediate action and spray pesticide to protect his crops.

“It was the first time I sprayed anything on my crops. I don’t even know what I sprayed. All I remember that it had a green tree on it,” he says. He didn’t question what he was asked to spray. It is not in his nature to question these things. How much was his yield this season? 13.5 quintals. “It has never been this good.”

“I thought it was the risk of farming”

Baramappa loves his phone. He uses everything. Whatsapp, Youtube, Telegram, Facebook and even GooglePay. Wadhwani AI’s pest management app is not his favourite though. That is the now banned Tiktok. When the extension workers asked him if he wanted to participate in the pilot he agreed – Another cool app on his brand new smartphone. It took a little time learning the process. Open the app, find the name of his village, upload the picture from his gallery and then wait for an advisory. The advisory, he says, was confusing. It gave him names of four pesticides he had never heard of before. And four? How could he afford four? He took a screenshot of the advisory and brought it to the pesticide retailer. The man at the counter nodded and handed him one bottle. “That’s when I realised the advisory was asking me to use one of them,” he says. The program and product team at Wadhwani AI had tracked this problem before. He was still sceptical but that was until it was the harvesting season.

In 2019, his yield was close to 7.5 quintals. It was about what he had come to expect. There was a steady decline in his yield over the last five years. From 10 quintals per acre, it had dropped to 7.5. “I thought it was the risk of farming,” he says. “These things just happen.” This year the yield is higher–13 quintals per acre. Any complaints? “I just wish you had come to our village last year.”